The Florida Gators started off the season with an upset of a top-10 Utah squad but still face a tough schedule in 2022 featuring a stout SEC slate. Sportsbooks seems to agree UF has a tough road in 2022 based on their Florida Gators odds for each game this year; of the five games with betting lines already listed at Fanduel Sportsbook, the Gators are only favored to win two of the five games (Kentucky and LSU).

Below you'll find all the latest betting lines for each Florida Gator football matchup in 2022. Not every game has odds listed currently but five of the 12 matchups have odds listed at FanDuel ahead of the season.

The 2022 Florida Gators are favored to beat Kentucky (-6.5) and LSU (-3.5) but are underdogs to Georgia (+15.5), Texas A&M (9.5) and even FSU (+2). As of writing, sportsbooks have not released odds for the Gators' matchups with USF, Tennessee, Eastern Washington, Missouri, South Carolina and Vanderbilt.

The Gators are -6.5 favorites over Kentucky, according to Florida sportsbooks expected to possibly launch in 2024 or 2025. The total is set at over/under 51.5 points.

Favorite Florida will want to avenge their loss in Lexington last season and should on talent. Kentucky losing Wan’Dale Robinson and Josh Ali will hurt the Wildcats, while Florida looks to be good enough, on paper, to handle UK.

Florida hasn’t lost back-to-back games to Kentucky since the late 1970s and it doesn’t look like it will happen again this year. Florida also holds a 53-19 record over Kentucky including 39 wins in the last 42 years.

Florida will win the game behind great running back production from Nay’quan Wright, Lorenzo Lingard, Montrell Johnson, and Heisman contender Anthony Richardson. Kentucky will take a step back this season and Florida should be able to capitalize.

Everything You Need to Know for Florida Gators vs Kentucky Wildcats

Florida was picked to finish third in the SEC East at SEC Media Days, while Kentucky was chosen fourth. It will likely feature two teams that are ranked low, if at all, and will be a battle to start the SEC schedule 1-0. 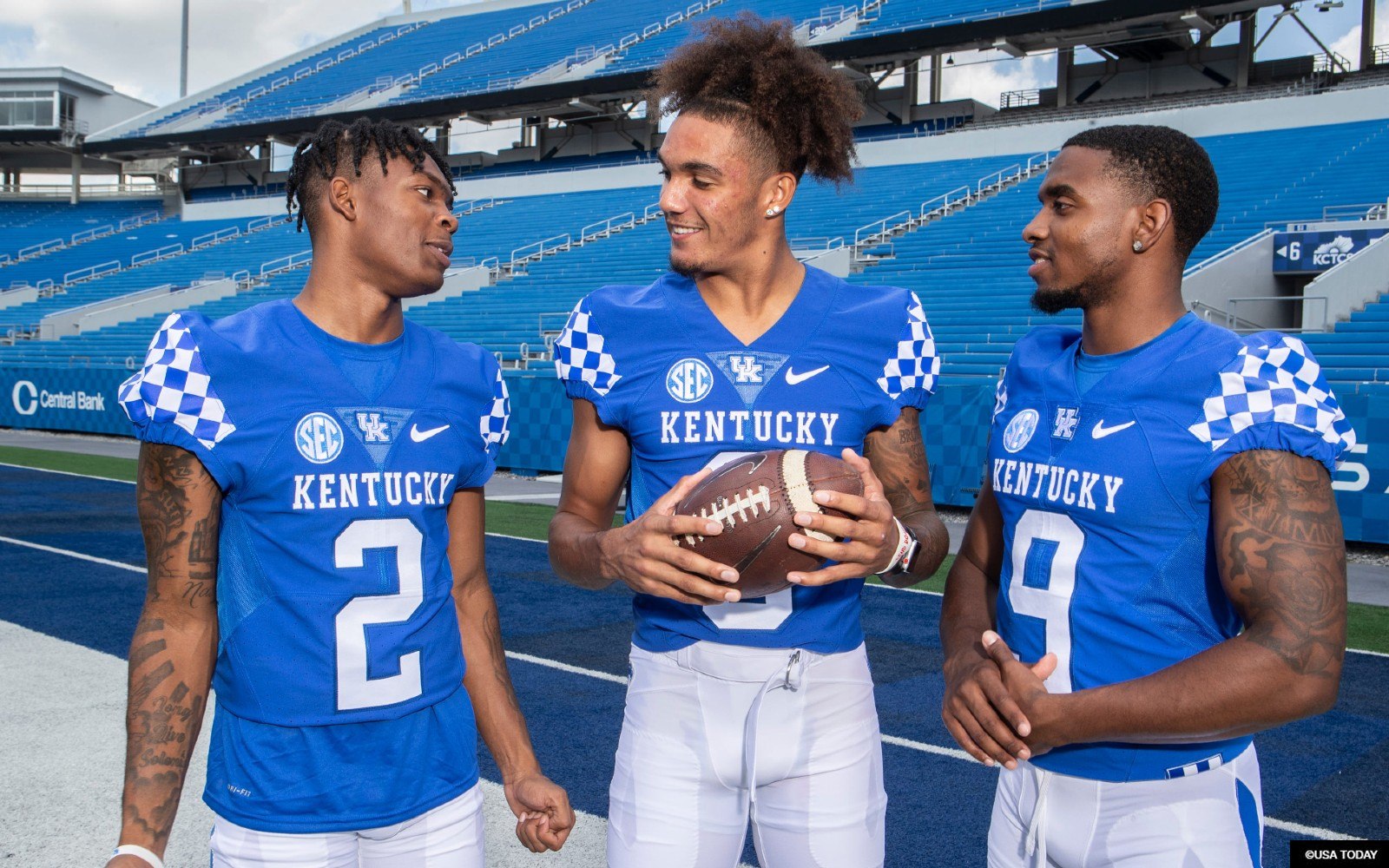 Kentucky lost its top two receiving threats, two offensive line starters, and ranks 77th in the country in returning production. The Wildcats will need quarterback Will Levis to lead them and find new targets. Florida will rest heavily on quarterback Anthony Richardson and their stacked running back room. Florida has the more talented defense and offensive line, and that could be all the Gators need.

The Gators are -3.5 favorites over LSU. Expect a close game as nine of the last 10 games have been decided by less than 10 points.

LSU looks to extend its win streak to four against Florida for the first time since 1977-1980. The Tigers won in a 49-42 shootout against the Gators last season, and bring new head Brian Kelly for the first time in his career. This year's game will come down to which offense will put up points against the other's solid defense. Expect fireworks and expect weirdness.

The Gators should be able to handle an LSU team that will be rebuilding under former Notre Dame head coach Brian Kelly and while both teams have question marks, LSU’s seem a bit bigger right now.

Everything You Need to Know for Florida Gators vs LSU Tigers

LSU has question marks at quarterback. Who will start – sixth-year senior Myles Brennan, former Arizona State transfer Jayden Daniels, redshirt freshman Garrett Nussmeier, or new enrollee Walker Howard? Whomever it may be will be throwing to one of the best wide receivers in the country, Kayshon Boutte.

While LSU has had Florida’s number recently, are the concerns at quarterback too big for LSU to beat a Florida defense that should be primed and ready to play? Coming back to Gainesville for the first time since Marco Wilson’s infamous “shoe toss” game, could give the Gators motivation to win. 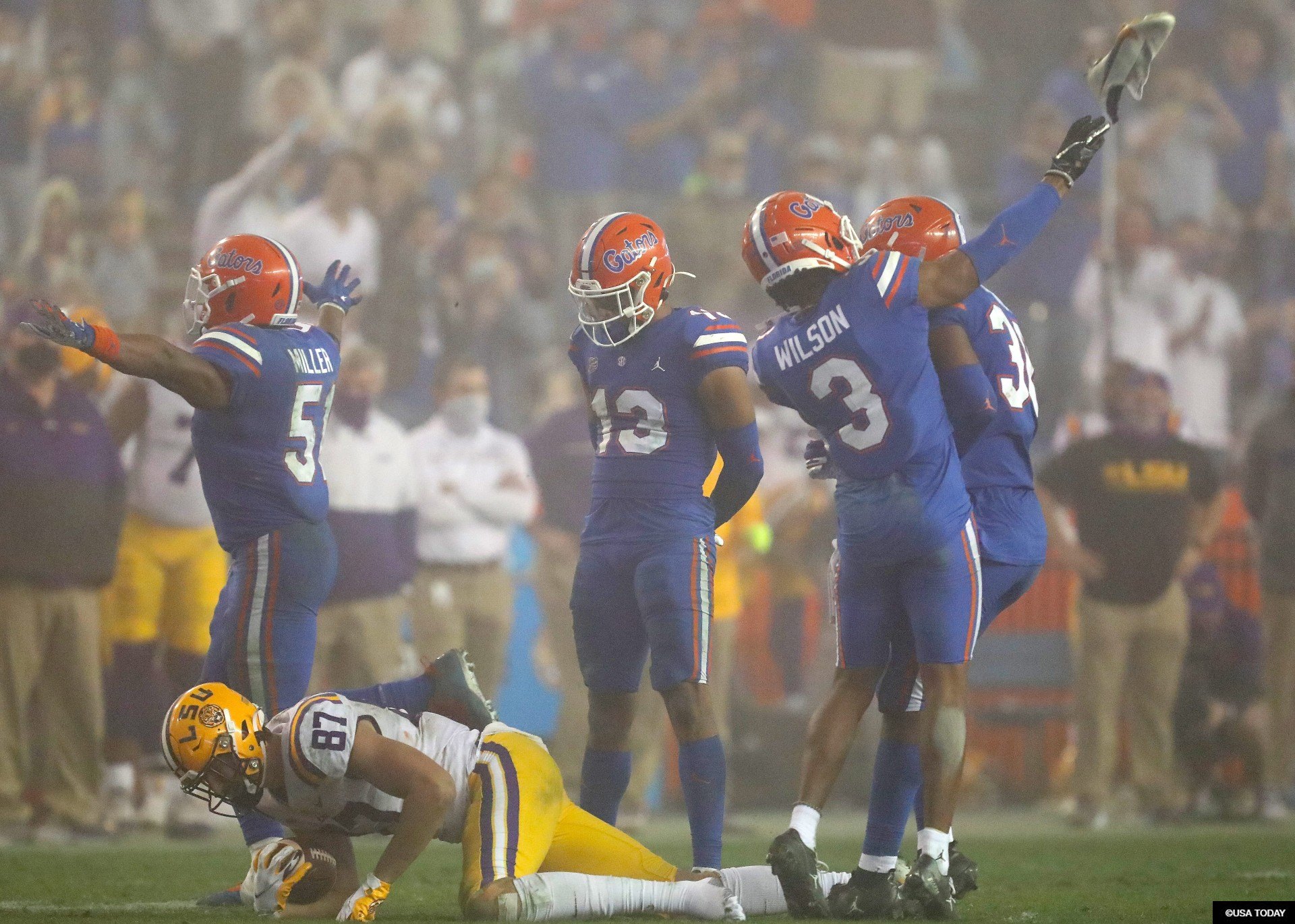 📸 USA Today Sports: After a tackle Florida Gators defensive back Marco Wilson (3) throws the shoe of LSU tight end Kole Taylor (87) which resulted in a personal foul penalty against Wilson, during a game against the LSU Tigers at Ben Hill Griffin Stadium in Gainesville, Florida on December 12, 2020.

Florida and LSU has often been a game of weird circumstances, from the aforementioned “shoe toss” to the fake field goal touchdown to win the game for the Tigers in 2015.

The Gators and Tigers have played consistently since 1954, with the Gators leading the series 33-32-3 but LSU currently on a 7-2 run. LSU and Florida are tied in Gainesville 10-10 in their last 20 matchups this could be the year the Tigers tie the series against their East Division foe.

Georgia has the more proven coach, more experience, and the far better recruited roster than the Florida Gators, but the Gators still have the potentially biggest x-factor in college football – quarterback Anthony Richardson. The Gators last beat Georgia in 2020 with another x-factor, in Heisman Trophy finalist Kyle Trask, so can they do it again?

It will be a tall order, but after Georgia lost so many players to the NFL last season, can the Gators capitalize?

The 2021 national champions should be able to be beat the Gators on pure talent alone, as one of the best recruiting teams in the country for the past five seasons. The Bulldogs replace a lot of players but they are filling many of their spots with highly ranked four- and five-star replacements.

Everything You Need to Know for Florida Gators vs Georgia Bulldogs

There is certainly no love lost in the game formerly known as the “World’s Largest Outdoor Cocktail Party." Both teams head to Jacksonville for their yearly match-up that has often decided who will win the SEC East. Florida is 1-4 against Georgia in the last five meetings after going 6-3 against the Bulldogs from 2008 to 2016. 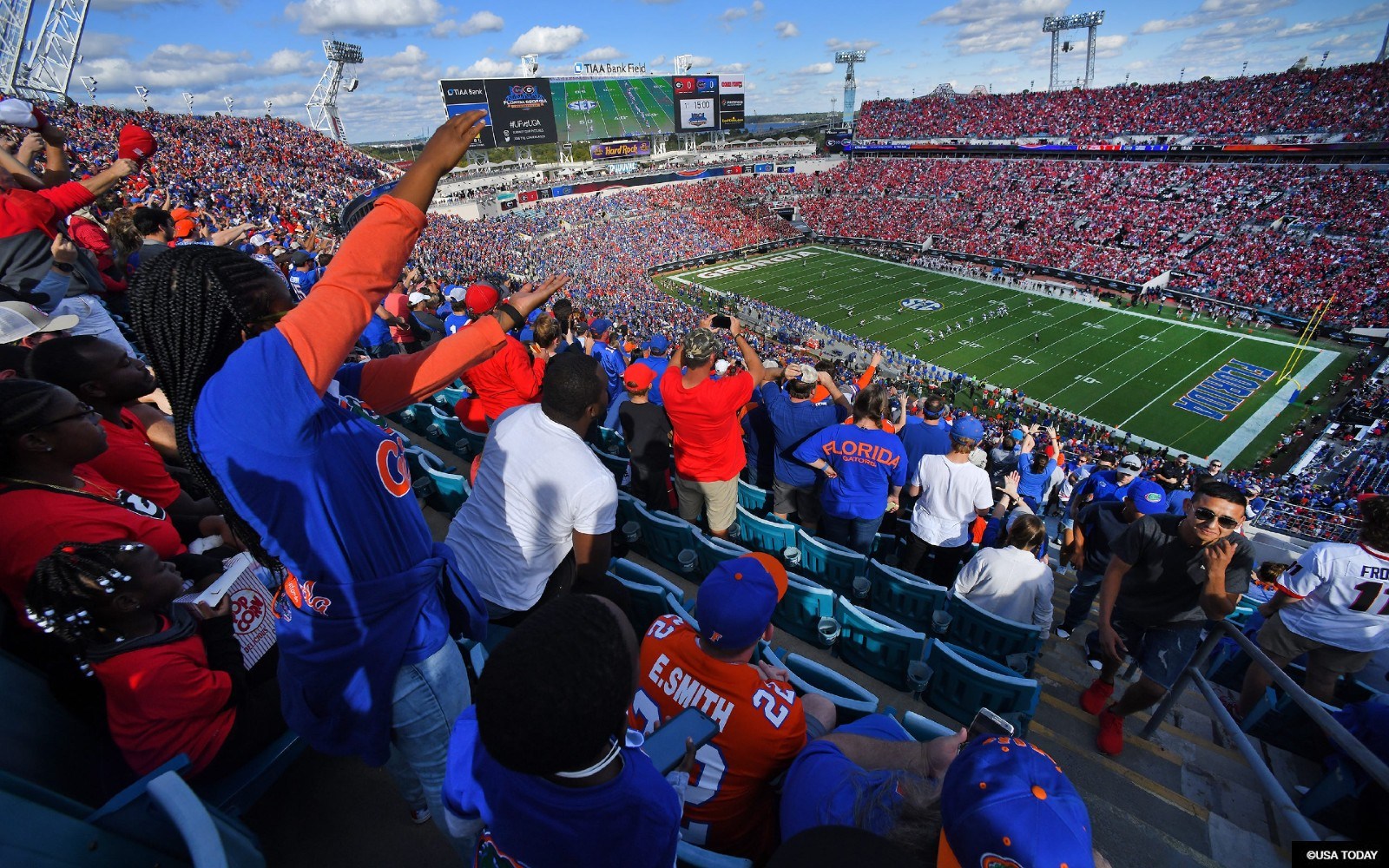 📸 USA Today Sports: The Florida Gators went into the half trailing the Georgia Bulldogs 24 to 0. The Florida Gators were the home team for this year's annual Florida vs Georgia college football rivalry game at TIAA Bank Field in Jacksonville, Florida on October 30, 2021.

Florida has been looking for a signature win to re-insert itself in the national conversation of top football programs and Billy Napier knows how important this game is to the Florida fanbase. Florida has high hopes and expectations to return to the SEC Championship and they currently run through Athens, Georgia, via Jacksonville

Florida is currently +9.5 underdogs against Texas A&M. The Gators were favored in their last matchup but lost a heartbreaker to the Aggies. This time Texas A&M will head into the matchup as the favorite and it's Gators who will look to pull out the upset.

Florida and Texas A&M meet toward the end of the season a week after the Gators play Georgia. Texas A&M plays a pass-happy Ole Miss after already having played Miami, Arkansas, Alabama, and likely an improved South Carolina team. This could be a game of which team has stayed the most healthy and which team is carrying momentum.

Texas A&M and Florida have always played tight games and I don’t expect this one to be much different. Jimbo Fisher has brought a lot of great talent to College Station, but it never seems to completely click, as he has lost four or more games in three of his four seasons in College Station. I do expect Texas A&M to win another nailbiter against the Gators simply because the Aggies defense should be a bit stronger.

Texas A&M has a bevy of incredible young talent, but those players are likely going to still be on second and third team. The Aggies continuously have great defenses, but this game could come down to Florida being able to stop Texas A&Ms offense enough. Will Texas A&M be able to finally get solid quarterback play out of Zach Calzada, Haynes King, or LSU transfer Max Johnson? 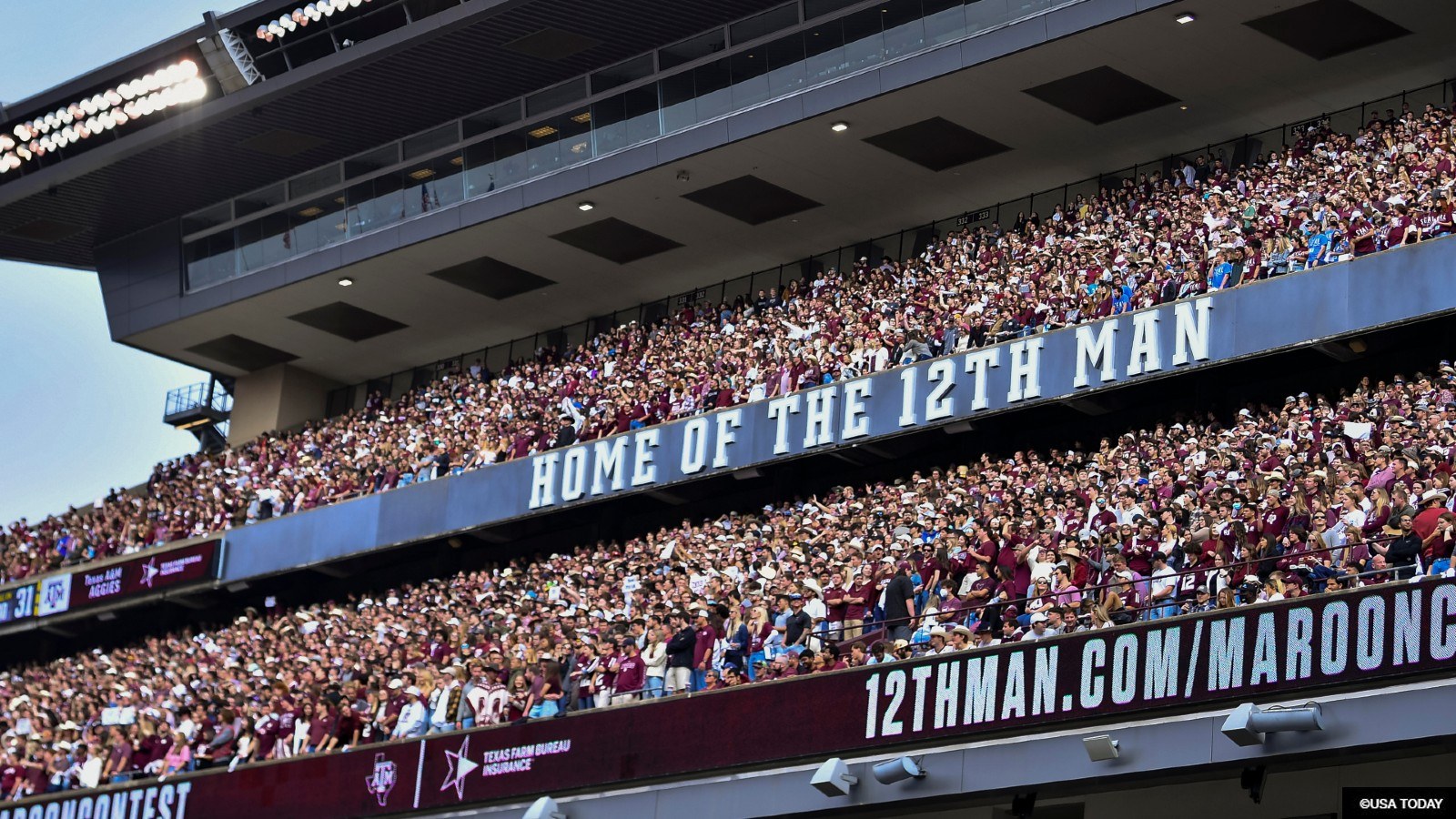 📸 Maria Lysaker - USA TODAY Sports: A general view of the stands at the last regular season home game between the Texas A&M Aggies and the Prairie View Am Panthers at Kyle Field in College Station, Texas on November 20, 2021.

The Aggies and Gators have played five times with Texas A&M leading 3-2. However, in the SEC, which the Aggies joined in 2012, A&M leads the series 2-1 with the three games being decided by three points, two points and three points, respectively.

The Gators are +2 underdogs to the Seminoles, although I would expect that line to change.

The Gators and Seminoles continue their yearly tradition of playing each other to end the regular season, but this time it’s on a Friday instead of a Saturday. The Seminoles, who should be improved, could be bowl eligible for the first time in three seasons and may need a win against the Gators to get there, while Florida looks to win the game for the fourth straight time – something they haven’t done since the mid to late 2000s.

This has historically been one of the top rivalries in college football. Florida should be able to easily handle Florida State, whose season is almost entirely reliant on the play of quarterback Jordan Travis. Florida has the better offensive weapons and stronger defense.

Everything You Need to Know for Florida Gators vs FSU Seminoles

Florida State, who hasn’t finished the season above .500 in four seasons, is looking to even the playing field against its state rival. Can FSU quarterback Jordan Travis stay healthy? Can the Seminoles get more out of their offensive skill players? Can transfer Jared Verse help make up for the loss of first-round draft pick Jermaine Johnson at defensive end? Or could another loss put head coach Mike Norvell out of a job? 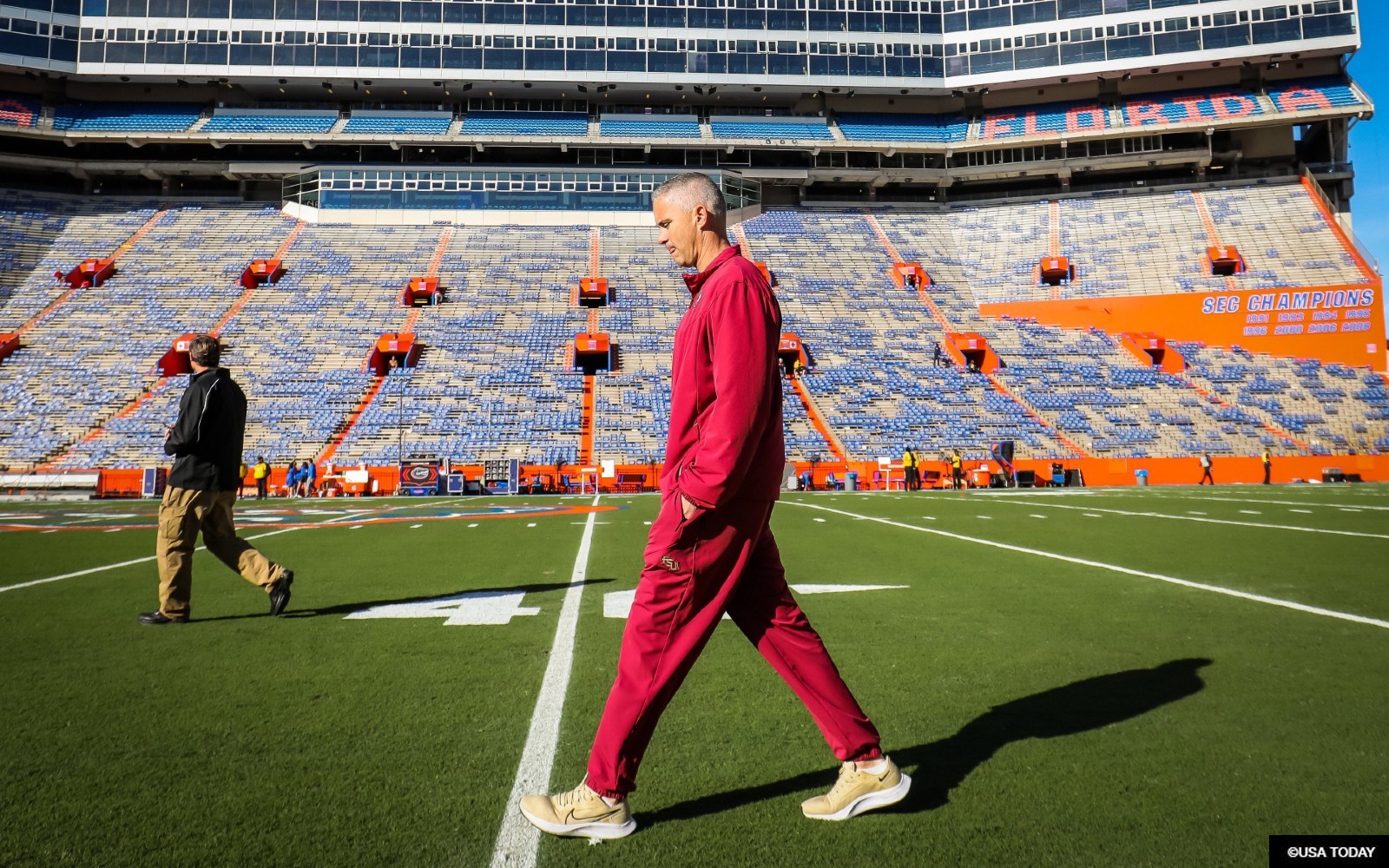 Florida has recruited better and has a more talented roster than the Seminoles, but this game could come down to how each team is faring at the end of the season. Florida plays a brutal schedule, while FSU plays, well, in the ACC. That could define where the Seminoles are on their quest for the postseason and how they show up for this game.

The Florida vs Florida State all-time record is 37-26-2 in favor of the Florida Gators with the Gators winning the last three games by a combined 53 points.

Florida opened as 15.5-point underdogs against Georgia. The Gators play Georgia in Jacksonville on October 29, 2022.

Florida opened as 9.5-point underdogs against Texas A&M. The Gators play at Texas A&M on November 5, 2022.

Florida opened as 2-point underdogs against FSU. The Gators play at Florida State on November 25, 2022.