Miami Heat Good at Rewarding its Fanbase; Orlando Not as Much

Many NBA fans, especially followers of Florida’s two NBA teams, are aware the Miami Heat and the Orlando Magic have been on vastly different trajectories over the last decade or so.

Over the last 11 seasons, the Heat have had eight winning campaigns, have made the playoffs eight times and won two NBA titles (also losing in the Finals twice).

In contrast, the Orlando Magic have had just one winning record over the same 11 seasons, managed to get into the playoffs just three times and were eliminated in the first round on all three trips to the postseason. For Orlando, it has been quite a fall from the previous decade when the Magic could be counted on to put together some solid, playoff-caliber seasons.

There is no legal Florida sports betting, and the future of wagering in the state is currently stuck in the court system.

FloridaBet.com developed a ranking system of the 30 NBA teams to determine what fanbases have been most rewarded over the last 11 seasons. 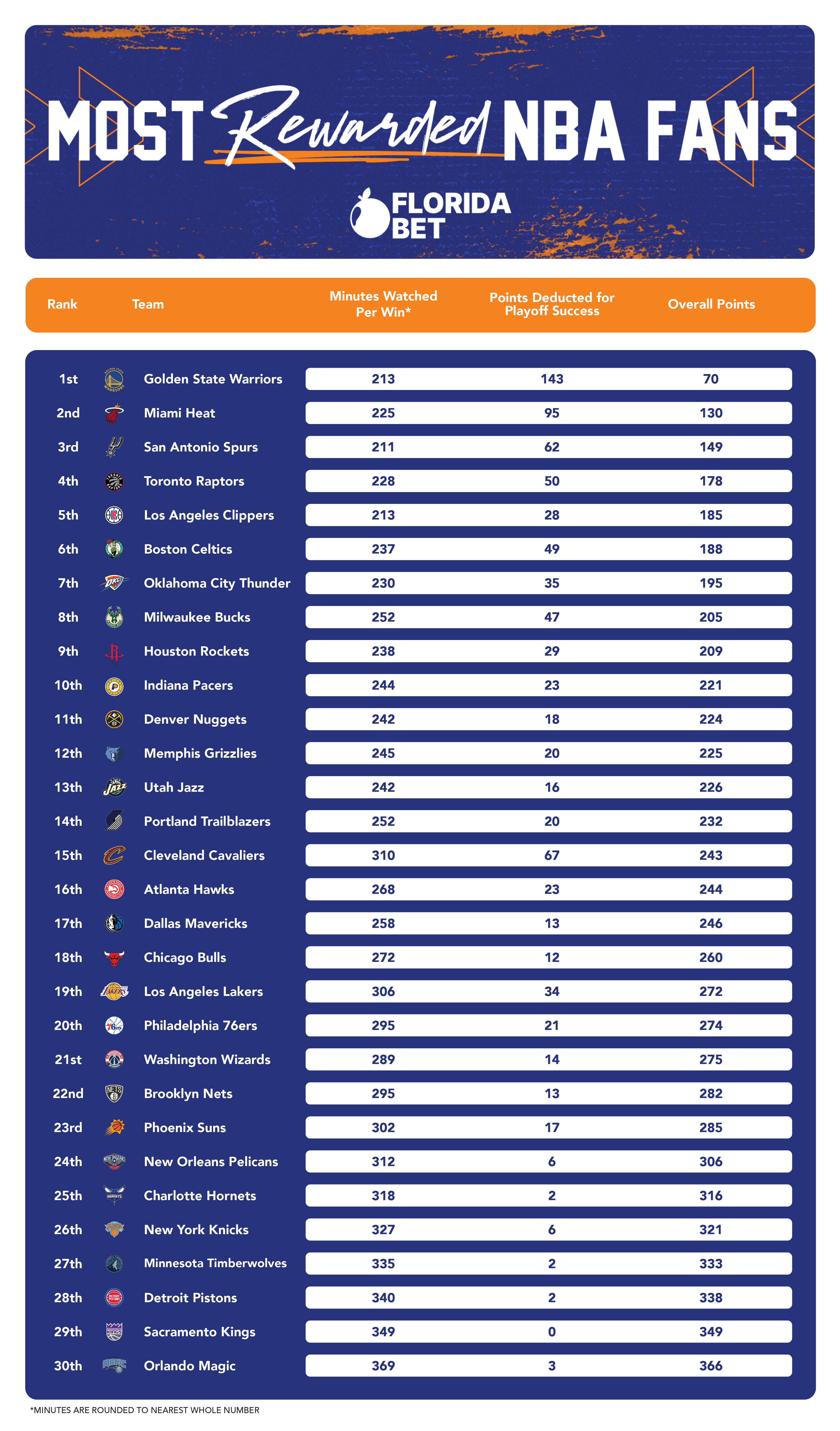 How the Ranking was Determined

The methodology first involved developing a category of “Minutes Spent Per Win.” That metric was determined by taking the amount of regular season games played by each team (from the 2011-12 season to the 2021-22 season) multiplied by the average length of an NBA televised game (2 hours, 13 minutes).

Once we calculated that number, we divided it by the number of wins during those same seasons to arrive at a final amount. The final amount represents the minutes watched by fans per regular season win over the last 11 seasons.

The second category — “Points Deducted for Playoff Success” — was utilized to determine the value of seeing playoff success during those 11 seasons gathered in the first category.

The point values assigned were: 1 point per playoff berth; 3 points per playoff series win; 3 points per NBA Finals appearance; and 15 extra points for an NBA Championship win. After adding all the points together for every postseason from the 2011-12 season to the 2021-22 season, the points were deducted from the first category to arrive on the final points and rankings. In the Most Rewarded NBA Fanbases methodology, fewer points resulted in a higher ranking.

Heat Have Talent for Rewarding Fans

As far as happily rewarding their fan base, only the Golden State Warriors earned a high ranking than the Heat, finishing first with 70 overall points.

Finishing at the bottom of the rankings in rewarding their fan bases with Orlando were the Sacramento Kings (No. 29) and the Detroit Pistons (No. 28).

Things don’t figure to improve for Orlando any time soon, as BetMGM Sportsbook lists the Magic in an eight-way tie for last in NBA Championship odds at +50000.

The Heat are in a little better shape at +1800, but that’s still below seven other teams.

When and if sports betting does in the state, FloridaBet the best reviews of the top FL sportsbooks, like HardRock Sportsbook Florida.

Where Do Florida’s NFL Teams Rank As Destinations for Away Games?

Bill Ordine was a reporter and editor in news and sports for the Philadelphia Inquirer and Baltimore Sun for 25 years, and was a lead reporter on a team that was a finalist for the Pulitzer Prize in Breaking News. Bill started reporting on casinos and gaming shortly after Atlantic City’s first gambling halls opened and wrote a syndicated column on travel to casino destinations for 10 years. He covered the World Series of Poker for a decade and his articles on gaming have appeared in many major U.S. newspapers, such as the Los Angeles Times, Chicago Tribune, Miami Herald and others.