It’s been 47 years since the movie “Jaws” scared the swimsuits off beachgoers, and sharks are still both fascinating and terrifying. Our national interest in the big, toothy fish, has become so consuming that in 1988, Discovery Channel started airing “Shark Week.”

On July 24, Discovery will launch the 34th week of programming featuring great whites, hammerheads, and more. Hold on to your limbs and get out the popcorn.

Since 1900, according to SharkAttackData.com, there have been 1,636 unprovoked shark attacks, and Florida (828) accounts for slightly more than half. Hawaii follows with 230 attacks, and California is third at 187. The Carolinas round out the top five. 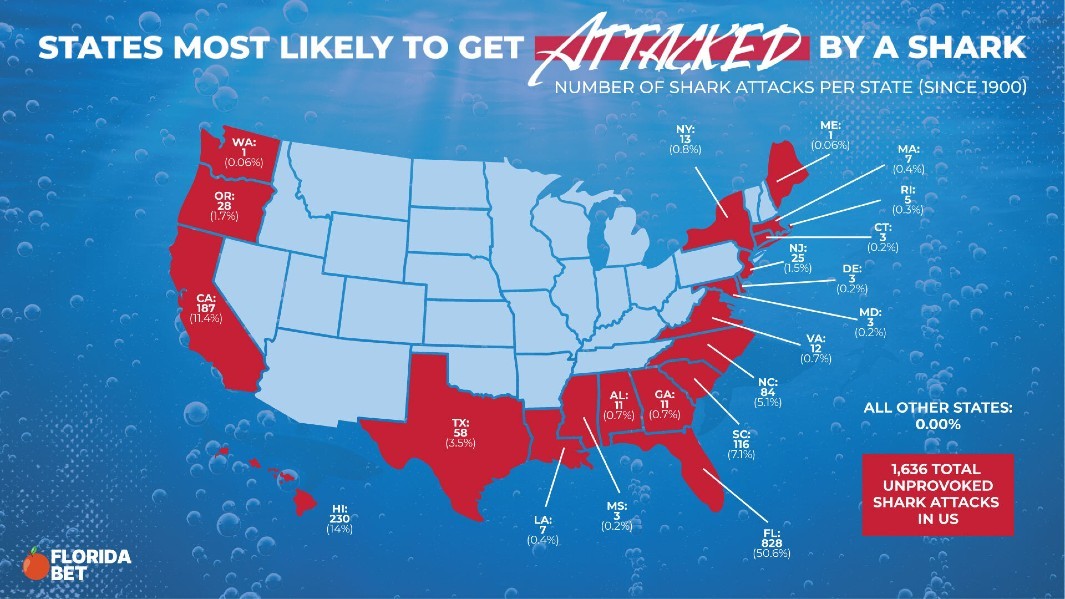 * Methodology: FloridaBet.com utilized SharkAttackData.com to find every unprovoked shark attack that has occurred in each state since 1900. After determining each states’ amount of shark attacks, we divided it by the total amount in the U.S. to determine the likelihood of being attacked by a shark by state.

Florida No. 1 for Shark Bites

How likely? In reality, not that likely. Even in the waters off Florida, there were only 28 confirmed shark bites in 2021 — but that was still good enough to land the home of Disney World as No. 1 in the world.

And where in Florida is one most likely to encounter a shark? Volusia County. That’s where 63% of Florida’s shark bites happened. But given how many residents and tourists hit the waves at Daytona Beach and other parts of the Volusia County coastline, your odds of drowning in a pool in the county are greater than feeling the sharp cut of a shark’s tooth.

It’s important to note here that the majority of shark attacks are unprovoked. Even “Florida Man” isn’t that crazy as to troll a shark.

In 2021, according to the Florida Museum. Florida had 28 of the nation’s 47 unprovoked shark bites. At No. 2 was Hawaii with 6, South Carolina with 4, North Carolina and California with 3, Georgia with 2 and Maryland with 1 — California had the lone fatality.

Interestingly, just 4% of the shark bite incidents happened with snorkelers or free divers — 51% of those bitten were on surf boards or some other boards, 39% of the human chum came from swimmers or waders.

Here's Why Florida is No. 1

So why is Florida No. 1 in shark attacks? There are a few reasons.

Florida’s days at the top of the charts, however, may be coming to an end. The warming waters are diminishing the southern migration of blacktip sharks.

Dr. Stephen Kajiura, a shark researcher at Florida Atlantic University, told The Guardian in 2018, that a few years earlier, as many as 15,000 blacktip sharks might be in the Florida waters in February and March, as they swam south for warmer climates.

Recently those numbers have dropped precipitously — not because Florida’s waters have gotten too warm . . . yet, but because the ocean water farther north up the coast is now as warm as Florida’s was. That’s potentially good short-term news for Florida beachgoers but bad news for the planet, and the beachgoers in the Carolinas. No need for sharks to do all that swimming to Florida if the water off Myrtle Beach, South Carolina, is warm and cozy.