Where Do Florida’s NFL Teams Rank As Destinations for Away Games?

With millions of fans willing to travel across the country to see their favorite team, the NFL is a superpower in the world of sport. There are three teams in the state of Florida that opposing fans can visit – the Miami Dolphins, Jacksonville Jaguars and Tampa Bay Buccaneers.

So, where do those teams rank as destinations among the best NFL away games for visiting fans?

Comparing an array of factors including the distance between each stadium and the nearest airport, the number of bars and hotels, and the cost of visiting each location, we’ve been able to assign each NFL team an overall index score and rank the Jaguars, Dolphins and Buccaneers.

You couldn’t bet on these rankings, of course. Even if available, there is no legal sports betting in Florida at the moment.

FloridaBet.com will guide you through any developments along the road.

Despite an overall index score of just 49.7, the Miami Dolphins boast the best NFL away fan experience in Florida. This is largely because of the relative affordability of visiting Hard Rock Stadium, with a family of supporters expected to fork out just $487 for the gameday essentials.

However, the Dolphins are undone by the meager number of bars (2) and hotels (1) within one mile of Hard Rock Stadium, as well as the nearest airport being an inconvenient 14 miles away. 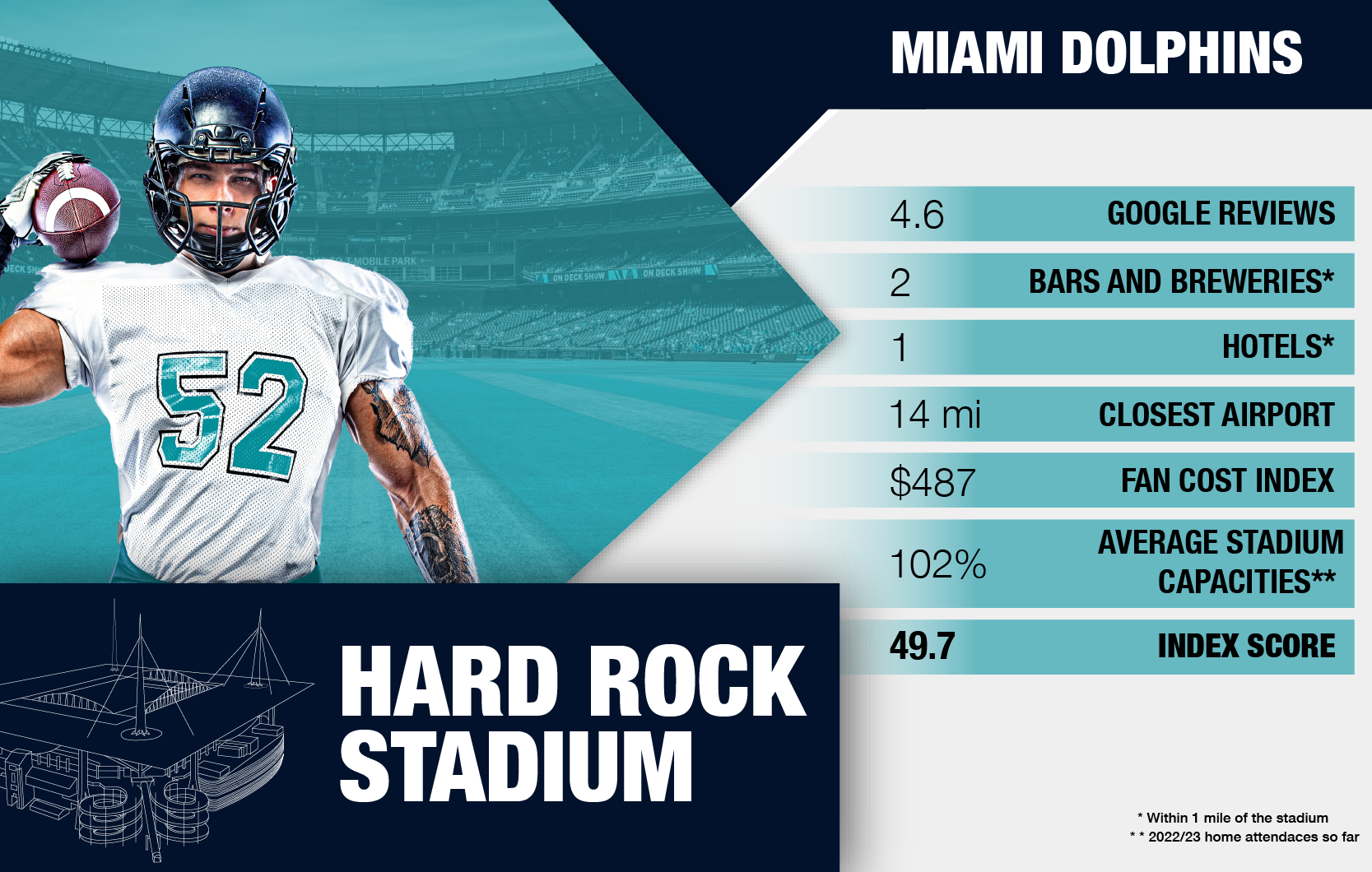 The Jacksonville Jaguars offer the second-best NFL away fan experience in the Sunshine State, with an index score of 42, helped along by having more bars within one mile of the stadium (4) than their Florida counterparts.

Meanwhile, the typical cost of visiting TIAA Bank Field ($463.48) also reflects favorably on the Jags, with only the Arizona Cardinals ($462.52) and Cincinnati Bengals ($437.30) asking for less from away supporters.

The Tampa Bay Buccaneers provide the worst NFL away fan experience in Florida according to our rankings, with an index score of 37.6. This places the Bucs ahead of just eight other teams, including the New York Jets (36), Green Bay Packers (35.6) and Philadelphia Eagles (34.7).

Fortunately, the Bucs have more hotels within one mile of their arena (12) than either the Dolphins (1) or Jaguars (0), as well as having an airport just 1.8 miles away – the shortest distance of any NFL team.

Where Are the Best and Worst NFL Destinations for Away Games?

We’ve analyzed where Florida’s NFL franchises rank among the best and worst away games for visiting supporters, but which other teams sit at either end of the table?

The Best Away Games for Visiting NFL Fans

The Worst Away Games for Visiting NFL Fans

To determine where Florida’s NFL teams rank when considering the best away supporter experience, we considered six different factors:

Each team was ranked for each factor and assigned a weighted index score. Index scores were then combined to give a total out of 100 and teams were ranked.

When using this data and research, please attribute by linking to this study and citing https://www.floridabet.com/.